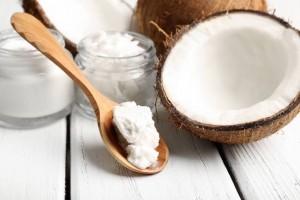 If  coconut oil is your go-to oil, read this.

According to many so-called experts, coconut oil is a cure-all that can do everything from clear up your skin to treat ulcers, burn fat, improve brain and heart health, among many other “amazing” benefits.

However, the scientific evidence to support coconut oil’s health benefits is still considered preliminary. Here’s what you need to know before swapping your olive oil for coconut oil.

Marketers of coconut oil claim the oil is rich medium-chain fatty acids, called MCTs (MCTs have between eight and 12 carbon atoms). MCTs are more easily burned as fuel and are thought to have health benefits compared to long-chain fatty acids. The problem is, the research on MCTs is generally with eight to 10-carbon fats and coconut oil is comprised of longer-chain MCTs of 12 and 14-carbon molecules, so studies that have used shorter chain MCTs don’t necessarily apply to coconut oil.

What’s more, much of the coconut oil sold in supermarkets and used in food products is highly refined and may lack some of the natural polyphenols present in virgin coconut oil. (This is similar to using a light olive oil instead of extra-virgin expeller pressed olive oil.)

It is 90 Percent Saturated Fat

Saturated fat is like blood sludge that raises harmful LDL cholesterol levels and theAmerican Heart Association recommends that we keep saturated fat to less than 7% of total calories. For a woman, that’s no more than 14 grams of saturated fat a day—or about what you get in a tablespoon of coconut oil.

Using virgin coconut oil on occasion when cooking and baking certainly won’t hurt you. However, eating lots (a tablespoon or more) of coconut oil daily for its health benefits is not yet recommended. And, if you’re struggling to lose weight, you’ll need to limit total calories so keep in mind that all fats contain 9 calories per gram, or 120 calories per tablespoon, so they pack in more than twice the calorie per weight compared to protein or carbohydrates.