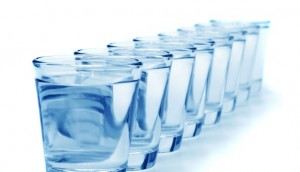 A few weeks ago, I stumbled upon an article regarding a woman who claimed tohave taken ten years off her face by drinking three litres of water a day.

At first I was rather skeptical about her affirmation, assuming it was yet another one of the many internet phenomena. Then I looked at the logic, and yes, it made perfect sense.

So off to the kitchen I went, measuring jug in hand – three litres of water a day, ten large glasses of water over a period of 24 hours – doable? Doable! I calculated how I would split my water over the day, timing my peak water input around my schedule in order to avoid obvious inconveniences, and my water challenge was launched.

Having been accustomed to withstanding long stretches of time with very little or no water at all, my kidneys initially could not keep up and I spent the first few days within very close proximity of a bathroom. However, being guilty of long-term and self-inflicted water deprivation, despite knowing better, I decided to persevere and see if the lady’s claims held any truth.

After a few days, I got accustomed to the change in my water consumption and the sweltering summer heat on my side, also surprised myself by actually feeling thirsty and exceeding my three litre a day quota on some days! Did I notice any difference? Yes! Three weeks into the experiment, the most noticeable change is my skin. It does seem more even and somewhat plumper than it did a while ago and I do look more refreshed than before.

My digestion also seems to have improved and I noticed I crave food less unless I am hungry. I also managed to lose a kilo despite eating more or less the same amount as I did before. I have become more attuned to thirst and respond to it more quickly now. I do feel more energetic and have less headaches than I normally would have. Shall I continue? Hopefully yes. It has been shown that a considerable proportion of adults consume less water than their body requires, so I do encourage readers to up their water consumption.

Article as appeared on DailyMail