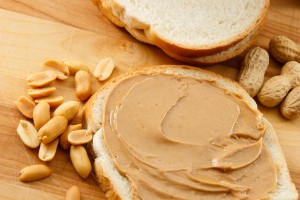 In 2015, a study claimed early exposure to peanut products could cut the risk of allergy by 80%.
Now researchers say “long-lasting” allergy protection can be sustained – even when the snacks are later avoided for a year.
The New England Journal of Medicine study looked at 550 children deemed prone to developing a peanut allergy.
The latest paper builds on the results of the 2015 research, which was also carried out by King’s College London and marked the first time scientists were able to suggest that exposing children to small amounts of peanut snacks could stave off an allergy.

The new study suggests that if a child has consumed peanut snacks within the first 11 months of life, then at the age of five they can afford to stop eating the food entirely for a year, and maintain no allergy.
Lead author Prof Gideon Lack said: “[The research] clearly demonstrates that the majority of infants did in fact remain protected and that the protection was long-lasting.”

He said that part of the problem was that people lived in a “culture of food fear”.
“I believe that this fear of food allergy has become a self-fulfilling prophecy, because the food is excluded from the diet and, as a result, the child fails to develop tolerance,” he told the BBC News website.
The researchers used the same children who took part in the 2015 study – half of whom had been given peanut snacks as a baby while the remainder had been fed on a diet of breast milk alone.

“The study found that at six years of age, there was no statistically significant increase in allergy after 12 months of avoidance, in those who had consumed peanut during the [2015] trial,” the authors said.
The children taking part in the study were considered prone to peanut allergy, because they had already developed eczema as a baby – an early warning sign of allergies.

Prof Lack said that further studies were needed to see if the resistance lasts for considerably longer than the 12-month abstinence period.
He said that in the UK and US combined, 20,000 babies a year are being diagnosed with peanut allergies.

He also said that between 1995 and 2005, the number of people being diagnosed had trebled, and this was not because detection methods had become any more advanced as they had remained the same.
Prof Barry Kay, from Imperial College London, said the study’s results “point the way to completely fresh thinking on the mechanisms of tolerance to allergenic foods in ‘at risk’ infants”.

Speaking about both pieces of research, Michael Walker, a consultant analyst and medical adviser to the government, said: “Taken together these are reassuring findings that pave the way to stem the epidemic of peanut allergy.”